Five years on: how different: where next? By Bill Esmond

A rationale for college research

My piece was sub-titled ‘Unequal or different’? I was arguing that colleges should not provide a cheaper version of universities, financed by the longer working hours of college staff. Instead, colleges should build on their differences in positive ways, for example building on the links of many college HE students to the world of work.

In particular, I argued against the way some colleges portrayed themselves as teaching-only institutions, where students were taught better because their staff had no research role. College teachers had no distractions from the classroom. This seemed to make a virtue of the high teaching loads of college staff relative to colleagues teaching the same subjects at universities.

I argued that, instead of embracing this slimmed-down professionalism, colleges could turn to research in the workplace. College HE staff, and their students, could access sites where many universities didn’t really have strong links. They could carry out studies that would have real value for work organisations and those who worked in them:

This was optimistic, of course, and I hadn’t expected this idea to gain much support in official circles.

Since the Labour governments after 1997 had encouraged partnerships and degrees, introducing the Foundation degree and funding part-time students generously, the world had changed. The course that government had set since 2010 appeared to be against the more academic orientation that universities brought to their college partnerships. Foundation degrees appeared out of favour, higher nationals back in; university partnerships on the slide, awarding body work on the up.

Yet the Scholarship Project was going to encourage colleges to support their staff’s research efforts. What had formerly been fringe activity by a few outlying staff, usually those wrapped up in their own doctoral studies, was to be officially sanctioned, and even supported with funding. Colleges were really going, in the words that ended my piece, to ‘think about taking ourselves higher’.

What should it mean to be a college tutor teaching higher education? Could staff in these roles find the space to engage with their subjects, the world of practice in which they were based and the theories built around that practice? I and others believed that enabling teachers to broaden their professionalism in this way would enhance not only their own understanding and practice but their educational relationship with their students. This would enrich students’ education far more than the narrow requirement that college staff should only teach.

But this could not be achieved simply by funding a finite number of time-limited projects. It meant a change to the way colleges supported (or bore down on) their higher education staff. Even a large project like the Scholarship Project would be unlikely to make serious inroads into this needed change. Indeed, the mechanisms by which colleges seek to maximise the outputs of their processes, which at a time of cuts has meant maximising the workload of their staff – the performative technologies, if you like – remain intact. The consequences for staff have too often included reductions in the time allowed for teaching and increases in class numbers and administrative requirements. This has been the story for other college staff too, of course.

The government rationale for higher education in colleges has shifted from seeing them as a way to draw in additional students, in the way that New Labour sought to reach its 50% HE participation target by college recruitment. Now the government is more concerned with lowering costs and with finding work-based routes. Rather than an academicisation of college HE, recent governments have sought to put it to work. The promotion of degree apprenticeships and the discourse of ‘higher technical education’ are the order of the day.

It is too early, of course, to identify definite features of ‘higher technical education’. The government has barely decided on the term, never mind succeeded in creating a viable second sector of higher education, more responsive to ‘employers’ and the needs of work organisations. It seems doubtful, however, that it will entail much emphasis on scholarship and research. The Sainsbury Review (which used this and several alternative terms) announced that its content should be decided by the Institute of Apprenticeships, although this applies to little outside degree apprenticeships so far.

In the current climate, it is perhaps too easy to see the Scholarship Project as an attempt by government to build the autonomy of colleges: to build up their capacity to stand independently of universities. As a result, the professionalism and practice of higher education staff in colleges were always going to end up more like those of other teachers in colleges, rather than those in universities. On balance, most college tutors probably find it harder to make time for research and scholarship now that they did five years ago.

Yet maybe new conditions and opportunities will arise after all. If higher technical education involves both college-based study and work-based practice at higher levels, college tutors, this also opens up the prospect of an expansion of professionalism. College staff will have a prodigious task in bringing together these domains, working with peers within work organisations. They will need to adapt, collaborate and advance their knowledge, not on the basis of imitating existing workplace practice but exploring how generalised knowledge, including supporting theory, can contribute to innovation and advances in practice.

The space for them to do so is likely to be restricted, much like that for scholarship and research over the last five years. But they may be able to achieve in collaboration with work-based professionals a degree of expertise and autonomy that working between colleges and universities did not always provide. This is likely to entail contestation with those who see learning through work as an opportunity to narrow the knowledge base of courses and the professionalism of teachers. The results are not guaranteed to provide equality with university colleagues in similar roles. However, the struggle for an expanded professionalism among college HE teachers will certainly go on.

Bill Esmond is Associate Professor Education and Employment, University of Derby. He was an HE practitioner in an FE College for twelve years and has studied this field as a researcher since 2008. 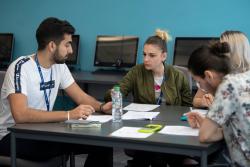